I know a lot about geomancy.  Not a lot of people do, though that’s very slowly changing.  Just as an experiment in reader involvement with my blog, let’s try something new: ask me questions on geomancy, right down in the comments!  I’ll reply as best I can, given the comment space, but let’s see what questions you all may have.

Just a few things before we begin:

And with that, have at!  I’ll stop replying to questions one week from today, so get your questions in soon and I’ll answer them as they come in.

After my introduction to grammatomancy, I’ve found myself using dice a lot more for divination in various ways that I think are pretty nifty.  When I say dice, I don’t mean standard six-sided dice, but a complete set of tabletop RPG gaming dice.  These kinds of dice have the advantage of being rather portable and pliable to many divination systems, and are fairly innocuous and subtle to boot.  Plus, for those who play tabletop games that require them, the notion of divination and the notion of action checks can be intimately similar.  For those who’re unfamiliar with such dice, one of these sets are usually includes seven dice, each with a different number of sides: 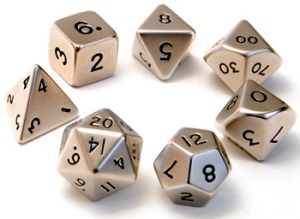 Although dice divination is ancient, the phrase itself refers to a manner of generating symbols by means of dice.  This could be as simple as odd-or-even for a yes/no question or as complex as rolling several dice to get a more complex symbol.  In my own practice, I use each of the dice for different purposes depending on their shapes:

What I haven’t yet quite figured out, though, is a proper consecration of the dice.  After all, like the good lil’ ceremonial magician I am, I’m practically obliged to consecrate or sanctify any and all tools I work with.  I’m thinking a consecration under the powers of Mercury/Hermes, given that he’s the god of gambling, adventures, and divination, all of which use dice in some manner or another, and all of which relate directly to Fortune itself.  I’m still undecided, but I’m sure I’ll come up with a ritual to do this eventually.  Perhaps the next time a good Mercury election comes around, I suppose, or when the Moon is full on a Wednesday in otherwise good conditions.  In the meantime, a quick prayer to Hermes and Apollo before casting the dice will suffice, I should think.

Do you guys use dice in your divination?  I’ve seen other methods of dice divination before, but it seems like it can vary from person to person or from culture to culture with few set rules to it.  How would you guys use dice, if you would at all?

Want to ask me something deep, or do you have an inquiry about my blog, services, or products? Contact me through email!

Just got a quick or silly question you want to ask anonymously? Visit me on Curious Cat!