On occasion, there’ll be something nifty on Kickstarter that crosses my path that I’ll throw money at.  Most of the time they’ll get funded (to my joy), and sometimes not (to my disappointment), but a little bit of advertising and spreading the word tends to go a long way.  If you’ll indulge me, dear reader, I think there’s something that you might consider nice to back yourself.

Now, I’m not a big Tarot reader myself; I started off with Tarot back when I was in middle school and high school, but geomancy’s been my thing for far longer than I ever used Tarot.  I can read Tarot if I need to, sure, and I’ll use some Tarot cards for scrying or magical purposes, but it’s not really my thing when I have other tools at my disposal.  That said, many of my colleagues, friends, mentors, and readers use Tarot for pretty much anything and everything, and I totally get and see why: it works, and particular Tarot decks can often be beautiful as well as symbolically powerful.

To be honest, how many Tarot decks are there out there?  Hundreds in common use, thousands that are easily accessible?  And how many do my readers actually have?  Some people have crates full of decks they’ve collected, some which haven’t even been opened yet!  I don’t collect Tarot myself (I have two decks to my name, and I only ever use one of them maybe a handful of times a year), and it’s not common that one strikes me as particularly nice or that elicits an “omg I need that” reaction.  But then, I’ve rarely come across something as beautiful and absolutely my aesthetic as the Sigil Arcanum Tarot project on Kickstarter.

I won’t go into too much detail here, as the good Rev. Erik Arneson over at Arnemancy already did a review on some of the cards, style, and design choices of the deck that Bell is making.  From the Kickstarter page itself, Bell is structuring the deck according to the principles behind the well-known Thoth deck:

This deck can be considered a Thoth compatible deck since it follows the same order in terms of the Major Arcana, and all of correspondences match the Thoth system. This choice was made to ensure that the attributions are as close to accurate as possible, a task which turns out to be more difficult than it may seem at first, because many tarot decks deviate from standards, and the two primary decks of the modern day (Thoth and Waite) deviate slightly from each other.

Each of the Major Arcana features a spectrum gradient of colors that relate to the energies of the card, and are particularly situated around each of those relative symbols; e.g. XVII The Star features a pentagram, hexagram, and double-heptagram. Inside the heptagram are the seven planets of alchemy, each colored according to their Sephirotic attributions (Mercury is orange, the Moon is purple, Venus is green, etc).

The Minor Arcana feature a two-tone color scheme to match the element. The core pips are the color of the element, and the special design is a shade darker, while the numerals and symbols at the bottom are white. 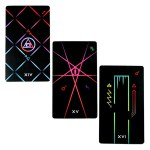 In addition to a colorized version, Bell is also making a Blackout version, which replaces all the colors with a glossy black paint on a matte black background:

The Blackout Edition of the Sigil Arcanum Tarot–which will feature all the same cards–will be printed with rich glossy ink offset on a substantial matte black paper stock. The result is a mesmerizing and sleek appearance which is best read by candle light. The deck appears entirely black on black, and you must shed light on the cards to reveal their hidden meanings.

The edges of the cards appear matte black due to the card stock, which adds to the dark effect. The box will be printed on the same matte black cover, with thicker, more sturdy paper, and will be printed offset to give the same illusory appearance. The booklet, however, will be printed normally, because let’s face it, nobody would want an all black instruction booklet.

As of this writing, it’s sitting at about $18.2k, and it needs $25k to get funded.  That being said, there are two stretch goals involved here, which would be fantastic for us to get to.  The first is for $30k which enables Bell to upgrade the packaging/storage quality, card quality and protection, and an upgrade to the Little White Book that comes with the kit; this is what I’m really hoping for.  But, even better than that, if we can get to $50k, there will be a full-size complete book on the Tarot that fully dives into the symbolism of each card, the historical significance of each symbol, more interpretations, ample examples of spreads, and more.  While having the whole book would be great, and while I’d be happy with just the decks themselves, I think the $30k stretch goal is more than enough to make everyone happy.

I may not read Tarot all that much, but hot damn, this deck makes me want to start.  With 12 days to go in the campaign, there’s still plenty of time to reach the goal, but that’s no reason to wait; hurry up and make your pledge today!  If you want a Thoth-structured deck that’s sublimely potent and elegant in its refined simplicity, head to Kickstarter and back the Sigil Arcanum Tarot!  Probably the best choice most people would go after is the US$42 option, which gets you one deck of cards, but there are lesser options and greater options available (including a US$70 option for two decks).  For more information, go head over to the Sigil Arcanum website proper!

Here’s hoping for a successful campaign; all luck to you, Taylor, and here’s wishing you all the best for this beautiful project!