As many of my readers and followers on Twitter and Facebook are aware, one of the most important things I craft for my personal practice are pieces of jewelry I wear in honor of the spirits or as talismans of particular forces.  This goes far beyond the lamens used in conjuration or Solomonic rings, but include what I’ve come to call carcanets, beaded necklaces and bracelets with colors, stones, and metals that resonate well with a particular spirit.  I started making them to have simple wearable talismans of planetary and elemental forces that wouldn’t attract too much attention or be too bulky to carry around, but I ended up making more for some of my gods and spirits, and then more for other people based on custom needs.  On Facebook, The Professor from the blog Traif Banquet noted that she’s seen me make many different types of carcanets and was interested in how I pick the colors and patterns for each, and how I consecrate them and use them in ritual work.  Of course, I was headed to a theme park that day to support the local LGBT community, so it wasn’t quite the time for such a discussion then and there, but I decided to oblige anyway and write a fuller explanation of what exactly I do.

So, what is a carcanet?  Physically speaking, a carcanet is ritual talismanic jewelry made from beads that sometimes incorporate precious and semi-precious stone or metal or wood or bone, sometimes religious items like saint medallions or crosses, and sometimes other items that is worn to derive the blessing, presence, and aid of a particular spiritual force or entity.  I make mine from artificial twine and seed beads and make them into necklaces and bracelets, though there’s nothing saying you have to use the same materials I do.  I use artificial twine because it’s sturdy and resistant to breaking, though elastic cord or leather can be useful too on occasion.  Each carcanet is attuned and consecrated to a particular force or spirit, and the colors, materials, and patterns on the carcanet indicate exactly what that attunement is and to whom or to what it’s consecrated by or under.

For instance, consider my Sash of Powers, something I made a while back for use in standard Western ceremonial work, which contains representations of all the forces used in Western ceremonial magic based on the Golden Dawn and Agrippan materia.  This is worn across one shoulder and drapes down to the opposite hip, since it’s far too long to wear as a necklace or bracelet.  Among other forces, the Sash of Powers contains the 24 forces that we use in mathesis and, for that matter, most of the Western mystery tradition, and the colors I use for this tend are those I tend to use in most of my work: 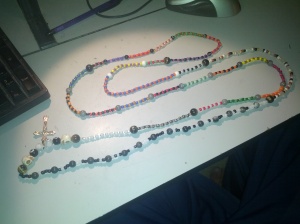 Of course, the Sash also has a few other things marked on it, including the 12 Banners of the Names of God and the 16 geomantic figures, but those aren’t forces, per se.  These are less colors to be used with forces and more representations of more complex things that can vary.  Geomantic figures, being ultimately related to the Earth, use white and black as the colors of the element of Earth (with a white bead noting an active line and a black bead a passive line in a geomantic figure); I used white, yellow-gold, black, and brown to represent the four letters of the Tetragrammaton put in their different permutations, but I’m not sure that it matters for this how or which colors to use.

Of course, I don’t make carcanets and the like for just pure forces.  The major focus of what I make nowadays is for individual spirits, gods, saints, and the like, and that’s where creativity and research really come into play.  Unfortunately, most of the Western tradition (especially books like the Lemegeton) focus on the use of certain kinds of metals or woods and less on colors than I’d like, so I have to branch out and be a little more innovative to figure out what colors go with what spirit.  However, the way I tend to settle on colors follows a pattern:

As a rule, I like to have at least two colors on the carcanet.  To be honest, this keeps the thing from being visually boring; I dislike having a single solid color unless it’s required for a spiritual purpose, kind of like the Santerian orisha Obatala having his eleke being pure white.  That said, most spirits tend to have a multitude of powers, fields, strengths, and things they rule over; the different colors I use reflect those different responsibilities and dominions.  Too many colors can be confusing, however; I usually stick between two and four colors per carcanet, but sometimes more if there’s a specific need for it or if the spirit itself is associated with having many colors.

Beyond the colors of beads themselves, most of my carcanets and the like often make use of precious and semi-precious stone and metal beads, and those are much better attested in the Western traditions generally.  Of course, color symbolism is important in picking these, too, as well as the specific resonances of the stones or metals or whatnot.  For instance, red stones tend to be ruled by Mars in general, though carnelian, ruby, and fire agate all have slightly different feels that may make them better for some forces or spirits instead of others.  The minerals and chemicals within the stones themselves, too, can be important, which can link them together with metals.  For instance, one of my favorite green stones is malachite, which contains a high amount of copper that gives it its bright green color.  Copper and green are both associated with Venus, which makes this an excellent Cytherean/Venereal stone suitable for the planetary force as well as the goddess Aphrodite.

Once I have the colors figured out, then it’s time to figure out the patterns.  The most straightforward and simple pattern, assuming two colors, is to alternate the colors of beads one by one (so red, black, red, black, red, black…).  Personally, I hate this system, and I try to stay away from it as much as I can.  I generally figure out patterns based on numbers sacred to the spirit.  For instance, Saint Cyprian’s sacred number is 9, so the patterns I use tend to involve 9 in some way; one such carcanet I made for him has nine black beads, three wine beads, one white bead, one clear bead, one white bead, and three more wine beads for a “set” of 18, or 2 × 9, and I’ll repeat this as many times as necessary to get a carcanet of suitable length.  My mathesis carcanet (yes, I even made one for that) has ten white beads followed by one gold bead, since 10 and 1 are sacred numbers in mathesis and Pythagoreanism.  My Venus carcanet has two sets of seven green beads separated by a tiger’s eye bead, two sets of seven gold beads separated by a green aventurine bead, and a set of 14 (2 × 7) beads that alternate green and gold.  Making the patterns can be tricky, but usually I have a good idea in my head before I launch into stringing the beads.  On occasion, I’ll decide a few sets into the carcanet that the pattern isn’t good and I’ll start over, but they’re generally close to what I had in mind.

Of course, crafting the carcanets and the like is only half the process; the other half is consecration.  Just like how the colors and patterns may change based on the purpose, the means of consecrating the carcanet will also change.  Generally speaking, however, consecration falls into two different methods.  Both methods first start off with ritually washing the carcanet off in holy water to cleanse and prepare it for future blessing, and both tend to involve anointing with oil and suffumigation in incense, but beyond that, they’re different:

Now that I think about it, the methods for consecrating them for a force via an angelic conjuration and for a spirit by dedication aren’t that different; it’s just two variations of the same idea, really.  Plus, depending on the carcanet and spirit/force it’s consecrated under, I may maintain its power in different ways, sometimes by anointing it with oil or “feeding” it with other sundry liquids, sometimes by praying over it, sometimes by letting it sit out in sunlight or moonlight.  It all depends.  The carcanet is a general ritual tool that, even though the material basis looks the same being made out of twine and glass, its spiritual essence and use may vary wildly.

Speaking of, how are these things used?  It’s pretty simple: you wear them.  That’s it.  I’ll often say a short blessing or invocation of the spirit or force to which a carcanet is dedicated or consecrated under when I don one, and I’ll say a prayer of thanks and blessing when I remove one, but that’s about it.  Seed beads are often too small for my big fingers to manipulate, so I don’t bother with using them as prayer tools but rather as part of spiritual regalia, armor, and connection when I need it.  On occasion, I’ll make a chaplet or set of prayer beads large enough to be worn, and in those cases the carcanet doubles as a prayer instrument, but this is the exception and not the norm for me; such prayer carcanets tend to use stone and metal beads more than seed beads, so the way I make them tends to differ a little bit since my options are usually more limited.

And yes, if you’re interested, I do take custom commissions for carcanets and can make them to your specifications or based on my own interactions with the gods and spirits.  If you like, contact me or send me a message through my Etsy shop and we can hash something out.