I was looking over some of the threads in /r/occult on Reddit recently and came across a perplexing, bemusing thread that…not gonna lie, it made me too angry to reply to it.  Like, not enraged Tea Party-like flaming anger, but there was just so much wrong with the OP’s views that I had a hard time knowing where to begin.  They admitted they were new, but I contented myself with downvoting and upvoting replies appropriately in the thread.  The gist of the thread was that the OP was looking for “propper [sic] grimoires”, at first for display purposes like home decor but later to actually read and investigate.  After having been suggested the Clavicula Solomonis, the OP did some searching on Amazon, but decided he didn’t want “Knock-off / Edited / Bad copies of the book”, trying to find “the acutal [sic] book itself”.  From his later replies in the thread, he didn’t necessarily want the original manuscripts, just the “original text” instead of something that had been “edited into oblivion”.

I…what is this, I don’t even.  Essentially, what he’s asking is like asking for the original Gospel of John, Dao De Jing, or something similar, the very first copy taken down by hand without any of the translation, editing, or whatnot.  None of the attached philosophy or editing, just the good ol’ original text without any of the extra embellishment. 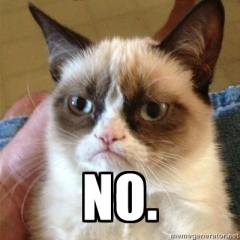 This is such a bad question that I honestly don’t know how to reply except “no, stop it, you’re doing it wrong”.  Actually, no, it’s so bad, it’s not even wrong.  Grimoires (literally “grammars”, methods and rules for learning and applying magic that often contain exact ritual specifications in addition to magical and ritual frameworks) aren’t discrete texts that arose independently in occult vacuums.  Grimoires, then and now, were part of a thriving (and often underground) tradition of magic that was derived from older grimoires before them and helped derive newer ones after them.  They were more academic than hedgewitchy formularies or herbals, and less philosophical than outright religious tractates on angels or heresies, but were still fairly academic texts.

The big issue is that academic rigor nowadays is much different from academic rigor back then.  Combining hearsay with experimental or anecdotal data, plus plenty of appeals to authority (Plato, Aristotle, Vergil, and Solomon were some of the faves back then), as well as flawless incorporation of spiritual and material knowledge yielded sometimes awkward but applicable logical results in magic.  The primary method of transcribing this method was by manuscript and handwritten text; given the expensive nature of book publishing and the fact that vanishingly few publishers would want their names sent to the Inquisition for starting up a Renaissance Llewellyn, there was really no other choice but to copy, write, and transcribe grimoires from book to blank book.  This would by nature make the texts different through copy differences and transcription errors, sometimes in significant ways (differences in sigils, holy names, and words of power especially).

Plus, these texts were also largely written and copied by people who were actually doing the work, reading and incorporating those texts into their own occult practice, perhaps keeping the text intact with as few errors or differences as possible, sometimes adding in their own information or experiments, sometimes blending in information or technique from multiple sources.  Whether they wanted to keep to the tradition verbatim, add in their own supplements, or make changes based on their own experiments (e.g. “method X won’t work as written, use improvised method Y for expected results”), the end results gave grimoires a life of their own, growing and changing with different generations of occultists and magicians.

Another big source of edits in the grimoires was that their source information was often unintelligible or poorly understood to begin with.  Many of the oldest texts we have out there in the grimoire tradition are in Greek or Hebrew, and many European occultists simply had bad understanding of either language; the phrase “it’s Greek to me” came from this very situation by monks with the same problem.  Between translation to translation to copy to copy, names or nuances might have been changed or lost, especially based on the aesthetics of the transcriber’s eye when it came to magical circles, diagrams, or sigils.  This is especially bad with Hebrew, as can be seen in many manuscripts of the middle-to-late Renaissance, where any word with “Hebrew letters” is downright illegible.  There’re good arguments to be made that these illegible or overly-and-poorly stylized Hebrew letters sometimes became magical sigils in their own right, which again would undergo changes from copy to copy.

And then there’s the whole notion of “forged” grimoires.  So what if something is a “forgery”?  What would it have been forged from?  Who even cares?  Half of the texts used in the Renaissance, medieval era, and back were variously attributed to the Jewish prophets, Christian apostles, Greek philosophers, rabbinic authorities, and so forth often with no real connection between what the prophet/philosopher/apostle/etc. was known for and what the text was about (cf. Sixth and Seventh Books of Moses, or the “Diadem of Moses” from the PGM, or Pietro d’Abano’s Heptameron).  The attribution of a text to a spurious author doesn’t really change the nature of the text; the real question on evaluating whether a magical text is legitimate is whether its magic is legitimate.  As Crowley said, “let success be thy proof”.  By this metric, then, even copies of the Necronomicon (a wholly and fully fictional text from Lovecraftian mythos that some authors took and ran with) are legitimate, because their magic works.  Who cares if it was made up out of whole cloth, or whether it was based on older sources?  If it works, it works; if not, trash it and start with a different text.

Asking for an “original grimoire” is…well, it’s a stupid request.  If you’re looking for an actual manuscript from the 1500s, you’d be better off trying to bribe one of the curators in the Bodleian or Ashmolean Libraries, or be willing to shell out thousands on eBay or something.  If you’re looking for the original text from which something came from, you’re on a fool’s errand.  Consider the Key of Solomon, which has some of its earliest known copies from the 1400s; we find similar information in the Grimoirum Verum and Liber Juratus, with information in Liber Juratus coming from the Hygromanteia and Sefer Razielis, which is based on the Sefer Raziel ha-Malakh, which comes from a tradition dating back to the classical Sefer ha-Razim and Greek Magical Papyri.  From Liber Juratus and the Key of Solomon, in turn, we also have material that formed the basis of the Heptameron, which is a close sibling or cousin to the planetary conjurations of the Munich Manual of Necromancy; from the Heptameron we have Trithemius’ method of drawing spirits into crystals, which itself forms the basis for much of my work.  Asking what the original source for all this stuff is, without edits or changes or translations, is like asking who the first guy who talked to angels with using a wand and circle.

I understand the want for a “critical edition” or “authoritative copy” of a text, I really do, but it’s something we take for granted in our modern age when we have Encyclopedia Britannica and Wikipedia and people from on-high or centralized systems telling us what’s cool and what’s not.  But this is hard to do when different copies of a given text are equally useful as tried by different people or handed down in different traditions, difficult when you’re looking at centuries of living tradition and practice that introduced features rather than bugs, and impossible when there’s no authority to judge authenticity or correctness.  Magic is often seen as belonging to orthopraxy instead of orthodoxy, proper practice instead of proper doctrine; magic involves actually doing stuff more than it does simply learning it.