A while back, I was flipping through one of my books on symbols (Symbols: Encyclopedia of Western Signs and Ideograms by Carl G. Liungman, an essential reference for anyone who works with or has work involving symbols and signs).  Though it spans all kinds of graphical symbols, it has a pretty large index of alchemical and occult symbols, which pleases me to no end.  Towards the back, I found this rather interesting symbol:

This is called the Catena Aurea Homeri, or the Golden Chain of Homer.  It comes from a Renaissance alchemical text of the same name, edited by Anton Josef Kirchweger.  The text is a simple, almost modern introduction to the processes of alchemy (the first part can be found online), the intent of which is to produce the Quintessence:

From the sky it comes,
To the sky it rises,
and down to Earth it must come again,
eternally changing.

The Golden Chain of Homer is a symbolic representation of the process to make Quintessnce, also called the Philsopher’s Stone, or the completion of the Great Work (alchemical, theurgical, or otherwise, it’s all the same in the end).  In other words, it provides a From the top of the Chain to the bottom,

Why am I talking about this out of nowhere?  Besides being an interesting alternative explanation of the Great Work from an alchemical perspective, almost like a chemical version of the Tree of Life, well… 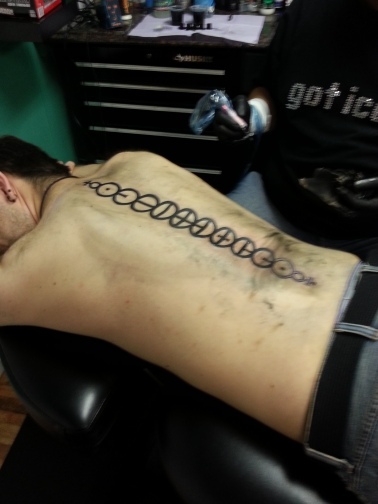 Okay, what they say about getting tattoos, “you can’t get just one”, is kinda true.  I started off with my caduceus and asclepian, and then due to timing I figured I may as well get this symbol engraved on my mortal coil.  My method of getting tattoos is that, as befits my Libran nature, I need to have balance: asymmetry here won’t cut it, so if I get a tattoo, it either needs to be centered (on the body’s midline) or balanced with something on the other side (caduceus on the left arm, asclepian on the right arm).  So, getting a large spine tattoo works pretty well for me.  That said, it hurt like a bitch; spine tattoos are notorious for being among the most painful, and the lower the tattoo went, the more painful it got.  It was actually more painful just off to the side of the spine than on the spine directly, but all the same, ouch.  (I don’t know why anyone would ever get a tramp stamp.)  Still, the tattoo was charged enough given my concentration and pain-focusing on it, which turned out really nicely.

Speaking of magic, I actually had a bit of help from the spirits for this.  The artist at Wild Style who tattooed the caduceus and asclepian on my arms had left, so I got a much more experienced tattoo artist with better machinery.  He had traced on the design from a stencil, and while I was lying on the bed waiting for him to finish preparing, I make a call out to my elemental and planetary allies to help me out with the impending pain and ordeal.  Out of nowhere, I get really anxious, uncommonly strong even for me, and just before he starts to turn on the tattoo gun, I get up and take a close look at the trace of the design on my back.  Turns out they had accidentally used the bottom half of the Chain for the top half (so that the chain went in stages 10-9-8-7-6-5-5-6-7-8-9-10 instead of the proper 1-2-3-4-5-6-7-8-9-10), which I immediately pointed out and had them retrace it.  It was an honest mistake on their part, and they didn’t catch that the chain wasn’t just a reflection.  But at least it was caught, and I wasn’t nearly as anxious after that.  Props to my spirit friends for making me check the design out again before it was made permanent; I burned a tableful of candles the next day to all the spheres and spirits I work with as thanks.

Still, the tattoo hurt.  Even though I was in experienced hands (Tony Scientific, awesome dude) with a new tattoo gun that was both faster and less painful than older guns, it was still two hours in one sitting.  I think this will be my last tattoo for a while, once it finishes healing and gets touched up next month.  All told, though, the design turned out pretty damn good, and I’m very pleased with it.  As a dedication of myself to the Great Work and to the completion of the cosmos that I’m working towards, I don’t think this could get much better.  (Also enjoy one of the few nearly-naked vanity shots I’ll ever willfully post on the Interwebs.)