Since one of my most favorite topics in occultism and magic is divination, specifically the divinatory art of geomancy, why not talk about that? I know a lot about it, and not many do, so let’s go with it. If nothing else, you’ll come away slightly more educated, and I’ll come away with something looking like productivity. With that in mind, let’s continue this little series of posts on geomancy, “De Geomanteia” (On Geomancy). This week, let’s talk about this figure:

This is the figure Fortuna Minor.  In Latin, its name means “Lesser Fortune”, but is also named “outward fortune” in some Islamic traditions, as well as “coming in of fame” and “outside/apparent help”.  If you (quite literally) connect the dots, you might come up with a figure that looks like a mountain with a staff atop it, or a procession of people guarding a central figure.

First, the technical details on this figure.  It’s associated with the Sun setting, at nighttime, or in southern declinations, and the astrological signs of Taurus or Leo (depending on whom you ask); due to its solar connections, it’s associated with the sephirah Tiphareth.  It has the fire and air lines active with the water and earth lines passive, and is overall associated with the element of Fire.  It is an even figure with six points, relating to objective situations rather than internal or experential evens.  It is a mobile and exiting figure, showing things to be dynamic, fast-moving, and fleeting in influence.  In the body, it signifies the spine and central to upper back.  Its inverse figure (everything this figure is not on an external level) is Fortuna Maior, the Greater Fortune, showing that this figure is not independent, not ultimately successful, not unique.  Its reverse figure (the same qualities of this figure taken to its opposite, internal extreme) is also Fortuna Maior, showing that there is no other kind of state between independent success or success dependent on others except those very things.  Its converse figure (the same qualities of this figure expressed in a similar manner) is itself, showing Forutna Minor to be unique in how it expresses its geomantic symbolism.  It is more favorable than not, showing success but of an unstable, impermanent kind that relies on outside support and shouldn’t itself be relied upon for long.  It is a figure of speed, swiftness, evasion, and escape, and is unfavorable in any matter that requires direct confrontation, slow progress, or long-term determination.

The imagery of the Fortuna figures, both Fortuna Maior and Fortuna Minor, can be best associated with wheels, circles, and cycles.  After all, they’re both ruled by the Sun, which moves in a circle around the sky from its highest daytime zenith to its lowest nighttime nadir, around the heavens from its highest summer northern declination to its lowest winter southern declination, from its hottest and most powerful point in Leo to its square and awkward point in Taurus, the strong sign of the Moon instead.  Fortuna Minor represents the Sun as it falls from its height, whether its setting from noon to midnight, its fall from bright Leo to dark Taurus, or its descent from the northern hemisphere of the sky to the southern hemisphere.  It’s still the Sun at all times, and still gives heat, light, and warmth to the world no matter the hour, day, or season.  However, as the Sun falls in its great cycles, it gets ever weaker, its strength wanes, and can support fewer and fewer people.  To make up for this deficit of solar energy, other people need to rely on other sources of heat and light, until the darkest and longest night of the year when the Sun is at its lowest, and weakest, point. 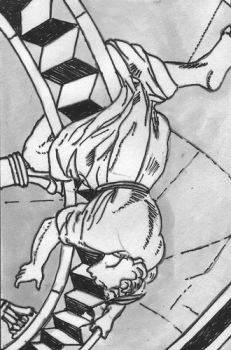 Just so does Fortuna Minor refer to success, fortune, and life.  Fortuna Minor is not a bad figure; just as the Sun always provides light and warmth, Fortuna Minor will always intimate success and good results.  However, as the Sun sets and becomes weaker, Fortuna Minor shows that this success and results will slowly become less effacious, less powerful, or less reliable as time goes on.  No matter how good things have been or how good they were looking, time is running out, and that success will run out, too.  Making use of the imagery of the Wheel of Fortune, Fortuna Minor represents the trip from the top to the bottom on the descending side of the Wheel; even though the ascent was slow-going, the descent is fast, and it’s easy to get crushed under the Wheel if you don’t jump off and find other means of success or livelihood to get by.  While you’re on the Wheel, it’s great and life is fantastic, but getting on the Wheel is one thing and falling off quite another.  No matter how much Fortune may favor the brave, Fortune is also fickle.

Just as one can ride the Wheel up to the top and we can rely on the Sun for heat and warmth for the summer and fall harvests, we too can rely on fortune and our inner success for quite some time.  However, as the Wheel falls and the Sun sets, we have to rely on other sources of energy and fortune in order to get by.  Fortuna Minor emphasizes this: it’s success from outside, from things we have to be dependent on, from circumstance and luck.  These are things we can pick up fast and lose just as fast; no matter how much we want to rely on ourselves, we simply aren’t enough to keep things going.  Life is good so long as you have someone to support you, but once you lose that support, you’ll have nothing.  Because of that speed of gaining and losing fortune and support, Fortuna Minor is associated with speed of results and speed of change, good for things that need help now, fantastic for things that need to be lost or escaped from, and excellent for short-term issues.  Because it relies on outside support so much, though, Fortuna Minor is poor for anything that Fortuna Maior would be good at: working independently, matters that take a long time, facing things head-on, going against the current or public opinion, and the like.

Fortuna Minor has the fire and air lines active, both hot elements, with water and earth passive.  Fortuna Minor is all motion, all energy, all light and heat without anything to sustain, contain, or preserve it; without some sort of kindling to keep that flame going or a furnace to keep it safe or sheltered, the fire will simply burn up and out, leaving nothing but the remnants of shadow and heat in the air.  That heat and light that pure air and fire unmixed with water or earth is good for only a short time, then gone.  The rapid movement along with its own heat and light give Fortuna Minor its fiery associations, just as the slow and steady pace of Fortuna Maior give that figure its earthy association.  This is the Sun at its most fiery and fast-paced, the chariot of Apollo in a rush to return to its stable, doing only the minimum it can before heading back into darkness.  This is not the noble, constant, all-benevolent Sun we’re used to, but it’s the Sun in darkness, at nighttime, in winter, the stingy and distant Holly King.  This is why, through its solar associations, the Solar figures  are given to Leo, but sometimes represented with the Sun’s sign of exile Aquarius.

When Fortuna Minor appears in a reading, it’s time to start thinking about wrapping things up in the near future.  Things will be good, but not for long, and with ever less time than you think you may have.  Situations won’t necessarily get worse, but they won’t get any better, either.  Any matter in which you can find support or people to back you up will go well, but if you have to face something alone or against the current, you’re going to have a bad time.  Its use in magic is similar: anything that needs a fast change or needs to be brought to a quick end is favored by this influence.  Falling off the Wheel of Fortune is really just a matter of timing: jump off too soon and you risk not getting all that you can out of a situation, but jump off too late and you risk falling off clumsily or, worse, getting crushed by fate.

Fittingly enough, this De Geomanteia post about the Sun at its weakest comes about on Christmas Day, right after the winter solstice and right before the close of 2012.  I’ll see you on the other side of the New Year, my friends and good readers, so have a merry Christmas, Saturnalia, Yule, Solar ingress into Capricorn, or whatever you may choose to celebrate around this time.  Have a happy end to the year, and enjoy these darkest nights when the Sun is at his lowest and the spirits in our spheres and our cups at their highest!