The caduceus is the staff carried by Hermes in Greek mythology. The same staff was also borne by heralds in general, for example by Iris, the messenger of Hera. It is a short staff entwined by two serpents, sometimes surmounted by wings. In Roman iconography it was often depicted being carried in the left hand of Mercury, the messenger of the gods, guide of the dead and protector of merchants, shepherds, gamblers, liars, and thieves.

As a symbolic object it represents Hermes (or the Roman Mercury), and by extension trades, occupations or undertakings associated with the god. In later Antiquity the caduceus provided the basis for the astrological symbol representing the planet Mercury. Thus, through its use in astrology and alchemy, it has come to denote the elemental metal of the same name.

By extension of its association with Mercury and Hermes, the caduceus is also a recognized symbol of commerce and negotiation, two realms in which balanced exchange and reciprocity are recognized as ideals. This association is ancient, and consistent from the Classical period to modern times. The caduceus is also used as a symbol representing printing, again by extension of the attributes of Mercury (in this case associated with writing and eloquence).

The term kerukeion denoted any herald’s staff, not necessarily associated with Hermes in particular.

The Homeric hymn to Hermes relates how Hermes offered his lyre fashioned from a tortoise shell as compensation for the cattle he stole from his half brother Apollo. Apollo in return gave Hermes the caduceus as a gesture of friendship. The association with the serpent thus connects Hermes to Apollo, as later the serpent was associated with Asclepius, the “son of Apollo”. The association of Apollo with the serpent is a continuation of the older Indo-European dragon-slayer motif. Wilhelm Heinrich Roscher (1913) pointed out that the serpent as an attribute of both Hermes and Asclepius is a variant of the “pre-historic semi-chthonic serpent hero known at Delphi as Python”, who in classical mythology is slain by Apollo.

One Greek myth of origin of the caduceus is part of the story of Tiresias, who found two snakes copulating and killed the female with his staff. Tiresias was immediately turned into a woman, and so remained until he was able to repeat the act with the male snake seven years later. This staff later came into the possession of the god Hermes, along with its transformative powers.

Another myth suggests that Hermes (or Mercury) saw two serpents entwined in mortal combat. Separating them with his wand he brought about peace between them, and as a result the wand with two serpents came to be seen as a sign of peace. 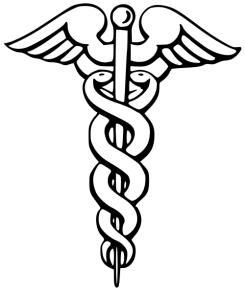 Hermes, more than any other role he’s known for, is the messenger of the gods.  He works under the authority of Zeus and the other Olympians to deliver messages, words, edicts, and decrees from on high to everywhere else in the cosmos.  Although most gods are thought of as kings, Hermes is explicitly not kingly at all.  Scepters and rods are seen as kingly implements used to rule, but Hermes wields the caduceus in his left hand.  His authority is taken from a higher being, and he’s simply operating under that authority, borrowing it as support instead of using his own authority to rely upon.  He directs with his right hand, doing the actual work of the gods manually, and channels his authority to do so from his left.  As such, Hermes never uses the caduceus as a simple walking stick, only ever holding it in his hands respectfully as a scepter.

The snakes and the wings on the caduceus make this staff quite unique, besides it being held by a god.  Birds and snakes are unusual creatures, able to rise between the worlds: birds fly in the skies, snakes slither on the ground, and both rest and roost in trees, a midpoint between them.  Wings represent the divine, celestial, and ouranic elements that Hermes deals with.   These deal with the words, the divine Logos, that Hermes is in charge of transmitting and communicating with the rest of the world.  These aren’t just simple messages to be relayed, however; Hermes is tasked with both leading the horse to water and making him drink.  On the other hand, the snakes represent the lively, terrestrial, chthonic elements.  These coiled serpents, twisted around the staff like a double-helixed strand of DNA, represent the basest of our natures, the actual inspiring work that soars upward to meet the divine nature coming downward to meet us halfway.  Both are needed to do the work and to form a tool that, much like the god himself, represents and travels between all levels of existence to do the bidding and will of the gods.

Hermes is a guide of spirits and souls, using the caduceus and the ever-present Word from Above to guide and instruct his followers.  The Word will always come, and the Word was always spoken and will always be spoken.  It’s up to Hermes to determine how that Word flows and communicates with the rest of the cosmos, who hears and what acts on that Word.  It’s the flow of this heavenly speech that Hermes is tasked with controlling, hence his job as god of language.  Words are what communicate ideas from person to person, as well as from above to below and below to above.  It’s what defines or frees concepts for us, limits or unties ideas, clarifies or darkens minds.  Hermes, as the god of words, can make words sharper or duller for us, and determine not only how words flow from one source but how a receiver of words takes them.

In that sense, the caduceus is not unlike a pen, with the wings representing ideas from above and the snakes representing the ink from below.  Ideas inform words that result in manifested reality, and just so does manifested reality create words to create new ideas.  As above, so below; from above to below, and to above from below.  Writing out one’s ideas is a way of clarifying those ideas, but it’s also a way of brainstorming new ideas from old words when done properly, and a way of getting lost in mazes of muddled meaning when done improperly.  Like Promethea’s snakes Mike and Mack, one is front, the other back; one is white, the other black; one is one, the other none.  The duality of words heard and spoken, flowing and blocked, understood and misunderstood have to work together in order to do work.

Where does the magician fit in?  Like Hermes, magicians are tasked with understanding their True Will, the Word for their ears alone, and carrying it out.  In order to do this, magicians must travel between worlds and between planes in order to clarify the Word they hear, and use their own words to bring their Word into effect.  The words we use define the reality we make.