Since one of my most favorite topics in occultism and magic is divination, specifically the divinatory art of geomancy, why not talk about that?  I know a lot about it, and not many do, so let’s go with it.  If nothing else, you’ll come away slightly more educated, and I’ll come away with something looking like productivity.  With that in mind, let’s continue this little series of posts on geomancy, “De Geomanteia” (On Geomancy).  This week, just to keep things exciting, let’s talk about technique instead of figures.  Specifically, let’s talk about the Via Puncti and variations on it.

In a geomantic chart, the four Mothers generate the four Daughters, pairs of the Mothers and Daughters generate the four Nieces, the four Nieces generate the two Witnesses, and the two Witnesses generate the single Judge.  (I suggest you learn about how to generate a geomantic chart before going further, if you’re new to geomancy.)  In a sense, the Judge is the sum of the chart’s effects, the cumulative answer to the query posed to the geomancer, the complete message to be delivered to the querent.  The rest of the chart, perfection, figure sums, and the like only serve to flesh out the answer, but the Judge is the answer.  It’s as if all the other figures boil down to the Judge, leaving only the pure answer left.  However, there are still traces of the original figures all the way back up to the Mothers and Daughters left in the Judge.  Mathematically, this makes sense; because the number of points in the Mother figures is the same and in a transposed pattern in the Daughter figures, the Judge will always have an even number of points.

Another remnant of the original figures left in the Judge can be seen in the Judge’s active lines.  If a certain elemental line in the Judge is active (i.e. if a given line has a single point), at least one of the Mother or Daughter figures will also have that same line active.  Further, because of how geomantic charts are generated, there will be a chain from the Mothers/Daughters through the Nieces and Witnesses to the Judge that maintains that active line, carrying it all the way down from the top to the bottom.  This connects the resulting Judge to an originating Mother or Daughter, the final answer to an initial cause, and can be seen as showing a root factor in the creation of the Judge or final answer to the query.

When a figure has a certain line active, one and only one of its parent figures must have that line active.  If both of them had it active, then the resulting figure would have that line be passive (odd plus odd or even plus even both yield an even number of points).  If a certain figure has a line being passive, then its parents can either have both odd or both even lines for that specific line; this would cause the path to branch off and can, in some cases, lead to every Mother and Daughter figure being led to (viz. if the first Mother is Populus and the rest of the Mothers all have their fire line passive).

To illustrate this, consider the following chart: 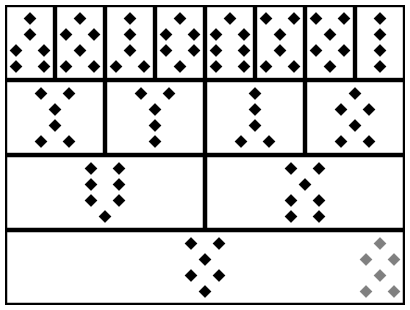 Traditionally, this method of following active points from the Judge to a top-tier figure is called the Via Puncti, or the “Way of the Point”.  In the extant geomantic literature, this is done only for the fire line, the element of will, intent, desire, and goals.  By following the Via Puncti for the fire line, we can ascertain the original or driving cause, desire, or force that’s pushing things through in the situation.  For instance, if the Via Puncti from the Judge in a question dealing about drama in the workplace leads to Puella, one might consider that it’s a woman in some capacity or role that’s the root cause of the drama.  Unlike the Index/Part of Spirit that shows fated or spiritually necessary influences in a chart, or the Part of Fortune that shows resources or help available in acquiring a resolution to an issue, the Via Puncti shows driving causes or forces that are keeping things going.  As a side-technique to fill in the details of a chart, the Via Puncti helps inform the querent about the past more than the future, why things are happening rather than how they will happen.

However, the Via Puncti only leads to a single figure when we focus on a line with a single point.  The literature does say that, when the relevant line in the Judge is passive, the Via Puncti will branch off.  The technique here changes in that we only follow passive points, i.e. when the parents of a figure have both lines passive instead of both active.  For instance, in the above chart, the fire line of Acquisitio is passive.  Both of the Witnesses have passive fire lines, too; however, the first two Nieces that make the Right Witness have their fire lines active, so the right branch of the Via Puncti stops at Rubeus.  On the left, the Via Puncti reaches up to the third and fourth Nieces through the Left Witness, but doesn’t rise to any of the Daughters.  In cases where the Via Puncti branches (or where there is no Via Puncti, if the Judge has a passive line and the Witnesses have active lines both), the chart could be said to either have no root cause or many root causes; I prefer the former interpretation in my geomancing.

Another variant of the Via Puncti, though it hasn’t been discussed except once or twice on geomancy mailing lists, is using other elements in the Via Puncti besides the fire line.  In this case, it’s not so much the root or driving intent of the situation, but other root causes influencing the final answer.  Going by the elements, we’d have up to four potential Viae Punctorum, or Ways of the Points, that show things that might be at the root of an answer to a query:

Something to keep in mind when it comes to the Via Puncti is how it relates to the astrological geomantic chart.  Since the Via Puncti can only link up to the Mothers or Daughters (but can branch to anywhere or nowhere if you’re allowing passive lines, but I don’t like this), this leads to one of the first eight houses in the astrological chart (if you’re using the traditional method of allotting figures to the houses, viz. first Mother to the first house, second Mother to the second house, etc.).  The Via Puncti can never, then, lead to houses nine through twelve.  I rationalize this by grouping the first four houses into the “personal houses” (things dealing with the querent’s personal sphere of influence, i.e. one’s own self, finances, local area, and home), the next four houses into the “interpersonal houses” (things dealing with other people that the querent interacts with, i.e. social interaction, service, relationships, others’ belongings), and the last four into the “transpersonal” houses (things affecting people on a grand scale, i.e. religion and philosophy, governments and public welfare, society as a while, and hidden or obscure institutions).  Distinct causes can only be noted when they can be specifically pinned down; thus, root causes of a situation must belong in either the personal sphere or the interpersonal sphere, or houses one through eight.