Alright, alright, alright!  After all this time, I finally gathered the last of my supplies, ran my experiments, and have compiled notes and pictures on my orgone system, a variant of the Babalon Matrix.  Gentlefolk and estimable peers of the magical blogosphere and internetical occulture, I present to you the Manifesting and Generating Orgone System, or the MaGOS for short.  (Please don’t kill me.)  Click on the link for the full write-up and analysis of this bit of tech I’ve been toying with over the past few months. 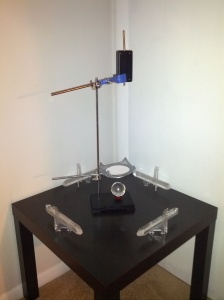 Long story short, I’ve basically made for myself a magical energy generator that can harness and accumulate force into objects I drop into the MaGOS.  The system combines energy manipulation and orgone technology, combined with liberal uses of crystals and sacred geometry, and is a pretty nifty tool to have around.  Despite the amount of time I’ve worked on it, it’s not exactly theurgic and doesn’t help me directly in that path of my spiritual and magical life.  As a tool, it’s not associated with any one force or sphere of reality, and in some regards is a fairly minor project in the long run.  However, I’ve already had the chance to use it in conjunction with ceremonial rituals, and boy howdy does it ever help out.

Now, I’ve written about orgone tech and the buildup to this big announcement in other posts on my blog, which you’re free to read up on, though the writeup of the MaGOS goes over the bulk of my experiments with the system:

Hopefully, this summarizes my experiences I’ve had thus far with working orgone tech in my magical practice.  I don’t see many surprising uses for this at this point, though I do expect to be making use of the MaGOS in more rituals and in potentially different ways than simply amplifying a magical ritual or having a certain item become charged. Feel free to post in the comments any questions, suggestions, or thoughts you might have; otherwise, let’s all happily move on from this topic onto a new one.  How about another lively debate about the HGA?  Those are always fun.