Why does Hermes (Mercury, though I’ve started calling him by his Greek name) carry the caduceus in his left hand?  So he can masturbate better with his right, duh.  And although I wish that actually were the answer (but who can say?), I asked him recently, and it’s because he’s only the god of messengers, and a messenger himself; scepters and wands are marks of kingship and authority, and he’s only acting as a herald in the name of someone higher than him.  While he’s allowed to work in almighty Zeus’ name and with his authority given to him by the big bearded guy, he cannot take it as his own.  Instead, he guides others to where he needs to be, letting the authority and might of the High, taking the scepter from his superior’s own right hand in his left, to guide him to where he needs to be so that he can do the same for others.  Pretty nifty, no?

This is just one of the things I learned from the god Hermes recently in the course of my life and Work.  As a Hermetic magician, I keep bumping into the guy and, after some talking and self-discovery, I’ve decided to volunteer myself as servant and priest to Hermes, god of the way, of thieves, of magic and astrology, and a slew of other things.  (Or, rather, he decided to volunteer me, but either way, here I am.)  It’s kind of a weird thing for me, never having grown up religious and only interacting with gods and goddesses in the context of magic and exploration of the universe.  Then again, I suppose the cosmos itself has a few tricks up its sleeves, and the cog in the machine that is myself fits into several spots in the wheels that keep things going.

To that end, here’s a compilation of some of the things I know, do, and perform in my service to the god, if you’re so interested.  For those in the know, I’m not coming from a Hellenismos or similar modern path or organization, though now that I think about it, contacting one or two might not be a bad idea.  This is all stuff that I’m learning and doing on my own, but if you have any suggestions, feel free to add in the comments.

First, some background on the god himself.  According to Theoi.com,

Hermes was the great Olympian God of animal husbandry, roads, travel, hospitality, heralds, diplomacy, trade, thievery, language, writing, persuasion, cunning wiles, athletic contests, gymnasiums, astronomy, and astrology. He was also the personal agent and herald of Zeus, the king of the gods. Hermes was depicted as either a handsome and athletic, beardless youth, or as an older bearded man. His attributes included the herald’s wand or kerykeion (Latin caduceus), winged boots, and sometimes a winged travellers cap and chlamys cloak.

As a planetary force, the Picatrix and Agrippa (book I, chapter 29) have this to say about the god and planet:

Things under Mercury are these; amongst Elements, Water, although it moves all things indistinctly; amongst humors, those especially which are mixed, as also the Animall spirit; amongst tasts [tastes] those that are various, strange, and mixed: amongst Metals, Quick-silver, Tin, the Slver Marcasite; amongst stones, the Emrald [emerald], Achates [agates], red Marble, Topaze, and those which are of divers colours, and various figures naturally, & those that are artificiall, as glass, & those which have a colour mixed with yellow, and green. Amongst Plants, and Trees, the Hazle [hazel], Five-leaved-grass, the Hearb [herb] Mercury, Fumitary, Pimpernell, Marjoram, Parsly [parsley], and such as have shorter and less leaves, being compounded of mixed natures, and divers colours. Animals also, that are of quick sence, ingenious, strong, inconstant, swift, and such as become easily acquainted with men, as Dogs, Apes, Foxes, Weesels [weasels], the Hart, and Mule; and all Animals that are of both sexes, and those which can change their Sex, as the Hare, Civet-Cat, and such like. Amongst birds, those which are naturally witty, melodious, and inconstant, as the Linet, Nightingale, Blackbird, Thrush, Lark, the Gnat-sapper, the bird Calandra, the Parret [parrot], the Pie, the Bird Ibis, the bird Porphyrio, the black Betle [beetle] with one horn. And amongst fish, the fish called Trochius, which goes into himself, also Pourcontrell for deceitfulness, and changeableness, and the Fork fish for its industry; the Mullet also that shakes off the bait on the hook with his taile.

Other names for the god in similar parts of the Mediterranean include Mercury (Roman), Turms (Etruscan), Terano (modern Tuscan), and there are lots of closely-related gods that resemble functions of Hermes in other pantheons and cultures.  However, not all of these are exact fits, and some of them are on weird terms with the god, while others are associated through ancillary functions of the dude (e.g. medicine, longevity).

Next, some background on my connection with the god.  He’s pretty awesome, for one, and is heavily involved in all the stuff I’m involved with:

As for my altar setup and devotional practices: 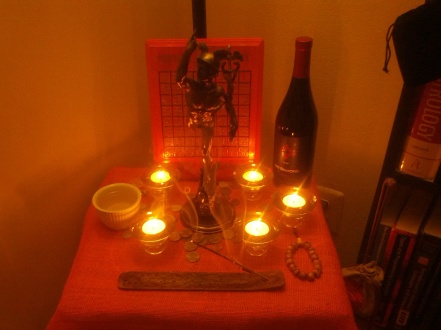 All in all, I use 27 or so days of the year as major events for Hermes, plus weekly adorations and any rituals I specifically need to call on him for.  As far as religious practices go, it’s involved, but it’s worth it.  For those on similar but different paths, a quick search on the internets revealed the following rituals for the god: