Based on comments from the last post by Satyr Magos, I got the idea to make a sigil wheel, much like the Rose Cross Sigil Wheel.  The idea is simple: have several rings of letters (Hebrew, in the case of the Rose Cross Sigil Wheel), and draw lines between successive letters to make a sigil.  There are different rules behind this, such as making loops or crests for doubled letters and starting off with a dot and ending with a line, but the idea is fairly straightforward.

Based on the division of Greek letters into elements, planets, and signs by means of stoicheia, Satyr Magos was looking for “a Greek-alphabet sigil map (akin to the Rose Cross in theory, but based on its own internal logic)”.  I decided to go ahead and try my hand at one possible arrangement of a sigil wheel, which resulted in the following.

The innermost wheel containing the letters psi, ksi, khi, theta, and phi correspond to the five elements of Aether, Water, Fire, Earth, and Air; the order comes from the standard elemental attribution of the elements to the pentagram.  The middle wheel containing the letters iota, omicron, upsilon, omega, alpha, epsilon, and eta correspond to the seven planets.  They’re in the same order as the normal planetary heptagram, but with the Sun aligned towards the top (here represented by iota), and the heptagram formed between them drawn counterclockwise yielding the order of the weekdays.  The outermost ring containing the rest of the consonants of Greek correspond to the twelve signs of the zodiac, starting with Aries (beta) at the top and going counterclockwise, as is seen on horoscopes.

Seen from a cosmological viewpoint, the outermost wheel represents an idea coming from outside and through the sphere of the fixed stars, or Kether and Chokmah; the middle wheel represents the seven planetary spheres, or Binah through Yesod, and the innermost wheel represents the Earth and Malkuth with its four elements plus Aether.  Aries, the Sun, and Aether are all aligned since the Sun has its exaltation in Aries, and Aries is the beginning and entrance of new spirit into the universe, and the Sun is the representation of the Spirit and Logos in manifestation.  I claim it makes sense as one way to order such a sigil wheel.

That’s enough explanation of the construction.  Onto the rules for using the Greek sigil wheel!  The rules are to start drawing a (potentially) crisscrossed line, with each corner of the line touching a different letter.  The resulting angular figure is the sigil of that particular word or name.  The initial point of the sigil is marked with a dot, and the final point is marked with a line.  If a certain letter is repeated, you make a little notch or niche at that particular letter; if a straight line crosses through a letter on the way to another one, the line has a little loop or bump on that letter.

Confused?  Don’t be.  Let’s try an example with my name first written in Greek (ΠΟΛΥΦΑΝΗΣ).  On the left we have the Sigil Wheel with the path of the sigil drawn out, starting at pi on the outermost ring with a large red dot, going to omicron, then lambda, and so on.  On the right, we have the sigil itself for my name.

Let’s try another.  Say you want to channel the forces of Mars into something using this format of sigil.  In Qabbalistic terms, you’d want the forces of Geburah, which in Greek is translated ΔΥΝΑΜΙΣ, or “Power”.  You’d create the following sigil and emblazon it on whatever you’d want to be made all Martian-y.  Notice how we’re crossing over psi completely, since it’s not included in the word at all.  If it were (viz. ΔΥΝΑΜΨΙΣ) then we’d make a loop over that letter to mark that we’re not just ignoring it. 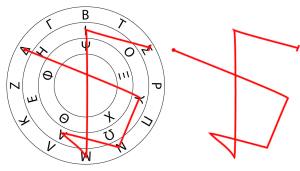 Say you want a sigil of the word for angel in Greek, which is written as ΑΓΓΕΛΟΣ (Greek uses a double gamma to represent the “ng” sound, because the Hellenes hate you and your orthographic good sense).  In that case, we make a loop or a notch at gamma when we do this sigil.  Otherwise, it’s pretty straightforward. 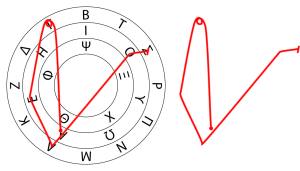 Ready for a real fun one?  The Greek Magical Papyri are filled with holy names, barbarous words of invocation, and other voces magicae that don’t often have recognizable meanings.  Plus, a good number of these words are palindromes, meaning they’re written the same front to back or back to front, which was supposed to lend them a more magical or forceful quality.  In that case, we wouldn’t have distinct start or end marks on our sigil.  Take the case of one of the most famous such words Ablanathanalba (ΑΒΛΑΝΑΘΑΝΑΛΒΑ), for instance.  Here, we have interconnected loops of letters that act almost like a spirograph, looping back on itself endlessly.  (Now’s the time to be confused, by the way, if you want to be.)

As an alternative to the Rose Cross Sigil Wheel, this Greek Sigil Wheel might actually stand a chance.  It’s entirely new, as far as I know, and could probably stand to go through a few refinements and tweaks.  May as well give it a try, though, until then.  For people who operate in a more Hellenic or pagan Hermetic method, as opposed to the Judeo-Christian field, this could be a very useful tool for their Work.