It’s no secret that geomancy is one of my favorite occult systems, and probably the one I have the most skill in (which may or may not be saying anything).  Lord knows I used my time and library resources at college getting every possible academic article on the art, as well as pilfering the PF section in the ancient library for finding any leads or books on geomancy, ifa, raml, or what-have-you.  If nothing else, I consider myself knowledgeable, though I’d love to get my hands on a few more original manuscripts or treatises on the subject (alas that I don’t speak classical Arabic).

That said, it’s a pretty flexible system of divination, and the symbols it uses can be widely applied in many situations.  Geomancy has a divinatory “alphabet” of sixteen figures, each of which can be seen as a composition of the four classical elements.  Each figure has four rows stacked atop each other, each row having one or two points; each row is related to one of the four elements, from top to bottom fire, air, water, and earth (from least dense to most dense).  A single point in a line shows that element to be active, present. and able to effect change.  Two points in a line show that element to be passive, absent, and able to be affected by other influences.  In a way, the geomantic figures are like alchemical formulae. 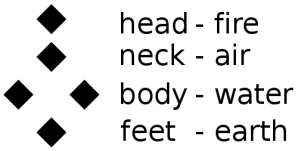 Consider the figure Puer, which has row of one, one, two, and one points; Puer has all elements but water active.  Puer represents youthful brazenness and rash energy, acting first and thinking later, and is typically bad in all things except love and war.  Like the old knights who used to go out and journey in the world for the Holy Grail, Puer seeks to go out and be received by the world for all he’s worth, either by a woman (who fulfills his lack of water) or by war (where compassion and emotion aren’t needed and can’t be found anyway).  He has the spear of Fire to exact his Will, the sword of Air to sort out friend from foe, and his shield of Earth to sustain and protect him, but Puer is made complete by his lack of water, and he acts the way he does without that last element to balance him out and make him a complete Unity.

It’s like that with all the figures.  Plus, in addition to being seen as alchemical formulae, they can also be seen as alchemical units, each having connections to a particular element, as well as corresponding to a planet and zodiac sign.  For Puer, those are Air (not Fire, except in terms of astrology), Mars, and Aries, which help flesh out the meaning of Puer and, more importantly, enable it to be used in most western occult practices.

One part of those practices is ritual motion, especially with that of the hands.  As I’ve noted before, hands and their positions, being one of the primary ways we interact and interpret the world, are highly important to us as human beings and as magicians.  Jason Miller, for instance, talks at length of various positions of the hands to represent different meanings or to direct the mind in particular ways, not least because he was trained by Nepalese and Tibetan Buddhist teachers.  Buddhism, Hinduism, and most other religions place a huge amount of importance of the positions of the hands in ritual or devotional artwork.  These positions are often called mudras, which literally means “seals”.  Different mudras connote different things, cultivate different mindsets, or create different meanings in the world.

Why not extend this to geomancy?  After all, we know that different parts of the body relate to different elements, planets, or signs.  Plus, some of the older geomantic authors described making the figures “much as the four fingers are” (the first line of points used to mark off the fire line of a figure having so many points, the air line having more than that, the water line having less than the air line, and the earth line having the fewest points of all, like the four non-thumb fingers of a hand).  It’s pretty simple, when you think about it: have the index finger represent the fire line of a figure, the middle finger represent the air line, the ring finger represent the water line, and the little finger represent the earth line.  We see this all over the place anyway in occultism and daily life.  The index finger is used to point out things and can be used as a wand (Fire); the middle finger bears the ring of the King of Swords and is the center finger of the hand, showing a balance between the rest (Air); the ring finger bears wedding or commemorative rings, which lead back to the heart (Water); the little finger bears the Solomonic ring, which is used to protect and ground ourselves from other influences (Earth).  Pretty neat, huh?  The thumb, in this case, wouldn’t relate to much (because, you know, fuck primates and their opposable digits).

To represent the activity or passivity of the elements, a particular figure’s mudra would extend a particular finger to represent the element’s passivity, and pull it downward to the palm to represent that element’s activity.  It’s kinda like counting backwards, since we normally think of a raised finger as being active, but consider the figure Populus: its elemental structure is completely passive, with no active elements.  Its associated mudra would be an empty and open hand, which lets all things flow in and out equally.  A closed fist would represent Via, whose elements are all entirely active, to represent a closed but dynamic and charged force that can influence and impact everything.  The thumb, since it doesn’t really matter much in this scheme, should just be positioned wherever it’s comfortable.  I claim this system makes sense.

So, that means that the mudra for Fortuna Major would look much like the the American Manual Alphabet sign for “V”.  Consider that gesture for a moment.  Fortuna Major represents complete and total success, total victory.  The “V” was famously used by Winston Churchill during WWII and by all Japanese teenagers and weeaboos to this day.  Plus, it’s also the same symbol used by priests to bless their congregations, and Fortuna Major is the figure representing the rising Sun (God risen and active in the world).  These kinds of coincidences can be seen repeatedly in this system of mudras, from Conjunctio (whose mudra looks much like the ASL sign for “I love you”) to Puella (which is just flipping the bird, telling someone to, well, be rather receptive like a bitch).

The mudras can represent the different forces of the elements, such as using Laetitia to represent pure fire, Rubeus pure air, Albus pure water, and Tristitia pure earth.  The other figures could be used as well to represent different manifestations of that element.  Fiery and airy geomantic mudras might be held aloft to receive that element (where sunlight, heat, and air currents travel) and held low to send it forth (like how fire and wind blow upwards); watery and earthy ones would be the reverse, held low to receive their powers from bodies of water or the Earth and aloft to pour or drop onto something below.  Alternatively, instead of using the elements, one might use the mudras to represent the planets or signs.  For instance, when I consecrate under the power of Jupiter, I might hold one hand in the mudra of Acquisitio and the other in the mudra of Laetitia.

This system of geomantic mudras can be used in pretty much any situation.  Stuck in traffic?  Throw up a Fortuna Minor mudra and invoke Mercury to get you out.  Going into a place that gives you the shivers?  Throw up the horns with one hand (not to be confused with the Conjunctio mudra) and the mudra for Carcer on the other to keep yourself isolated from the place or to bind a spirit into a particular spot.  Trying to contemplate the mysteries of Populus partnered with Populus?  Meditate with both hands open and facing upward on your lap.

I actually wrote a short paper on this for the benefit of the Geomantic Campus Yahoo! group, the only real mailing list I’ve found that discusses geomancy.  You might want to consider joining that group and pilfering the benefits of the resources gathered there and the occasional reading discussion.