I went to the nearby metaphysical shop to get some more incense, and found a few wands for sale.  They were pretty handcrafted ones from copper tubing, wire, solder (excessive amounts of solder), and quartz crystals, but they were also expensive.  Since I’m thinking that I’m not going to use the wand I crafted earlier, at least for this particular occult path, I wanted to see what else was out there.  In a fit of excitement, I went to the almost-neighboring hardware store and got a few things.

By a few things, I also mean a propane torch.  I have never been happier and more frightening to my friends.  I also got an engraving tool and a few other odds and ends, but OMG MASSIVE FIRE ON COMMAND.

After learning how to solder copper tubing, I made this neat little thing.  It’s about 14″ from end to end, with copper tubing and bronze caps on the ends.  I used the engraving tool to write on the symbols of the seven planets on the bronze caps, then washed off the wand and used some polish to clean up the appearance. 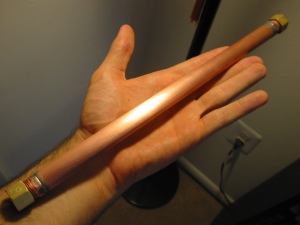 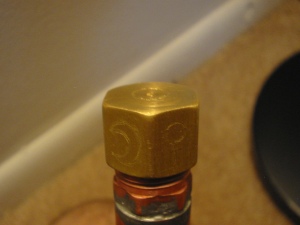 It’s still unfinished, though, and I’m somewhat at a loss of how to finish it.  For one, I don’t like that some of the groove can still be seen under the bronze ends, and copper wire won’t stay.  I might see if I can find a washer or large nut that can screw on just under it, but I’m not holding my breath; maybe something will come along.  The other issue is that the wand is completely hollow, and I’m looking for something to give it a core.  I don’t have the money for a solid condenser, but some other friends suggested I use a mixture of powders to create a “fire powder”: volcanic ash, sulphur, cinnamon, cayenne, and powdered chili pepper.  They also suggested using an obsidian, amber, tiger’s eye, or ruby (yeah, right) in the center of the wand as a focus, with the mixture on either side.  I might do something like this: pack one end of the wand with wool, pack in the fire powder, drop some gemstone or other into it, pack in more fire powder, then pack with wool and cap the wand off.  That’d just leave the wand to be consecrated later on, perhaps with a few more symbols carved into the shaft itself.

I like the feel of it, though.  It’s smooth, it’s heavy, it feels real, and it already feels…I dunno.  Magicky, I guess.  It reminds me somewhat of the wand that the Magician holds in the Rider-Waite deck, and it looks to be about the same proportion to me as it is to him. 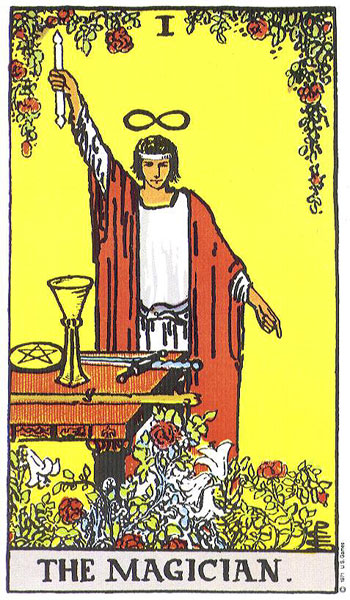 We’ll see how this goes, to be sure.  I do know for certain, though, that I will be getting my money’s worth out of that propane torch.