I go through a lot of candles, it’s true.  Part of it’s because I’m a gay man (because duh), but also because candles are used frequently in rituals and magical operations.  Based on the suggestion of this post at Rune Soup, I decided to take a trip to my nearby Ikea last weekend to get plain candles for cheap.  Of course, that required actually going into Ikea, and I’ve only ever been there once.  Clearly, it was time for an adventure.

I forgot how trippy it is, literally and figuratively.  After wandering the “natural path” of showrooms and throngs of mindless parents of those about to become college students, I ended up with a number of goodies more than just candles (I finally caved and got a hand juicer and a garlic press).  I think I’m probably good for a number of months now, candlewise; I mean, a 20-pack of 6-hour candlesticks for $8?  Yes, please.

Plus, I got a few pieces of furniture which I needed for the Work.  So far, I’ve been doing conjurations on top of a plastic storage tub, since I don’t have a double cube altar or anything otherwise suitable.  It was the proper height to kneel at, though, so I’ve been using my seiza bench with it.  This odd combination suffices, but it’s lacking in a certain finesse, and the tub was also pretty heavy with the shelves and stuff inside.  So, at Ikea, I finally bought a similarly-sized side table about the same size as the tub I was working with before.  Sure, it’s no double-cube altar, but it’ll work.  Besides, living in an apartment with a roommate and potential visitors, it’s nice to be able to have this stuff be put away on a moment’s notice. 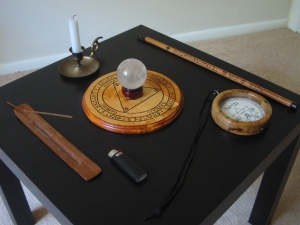 This will just be a simple conjuration altar, not a complete altar with the elemental weapons and stuff, and will be moved around and put away as necessary.  The ability for the table itself to be taken apart and reassembled quickly is a plus, if I need to bring it somewhere with me.  Beyond this, I also got a small-ish desk and matching chair that I’ll be using for that as a proper Table of Manifestation, which will be more of a permanent thing in my room.  I still don’t know much about a Hermetic altar setup beyond the four elemental weapons and something for the seven planets, so I’ll be looking into that soon enough.

If I had my way, I’d go ahead and build and paint a double-cube altar complete with inside shelves and hidden door, but that involves power tools and lumber that I lack, living in an apartment and all.  The nearest community rec center workshop is ten miles in any direction, which doesn’t help me much.  That’ll change once I get the money and space for a complete temple room, but for now, cheap self-assembled furniture it is.

But hey, double-cube altar named after some fjord or not, at least I have plenty of candles.